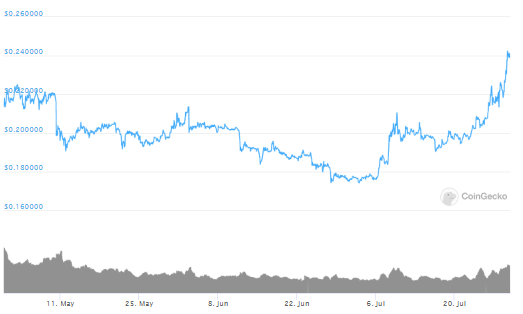 Prominent cryptocurrency, XRP finally pushed past 20 cents. While the community celebrated this, the coin’s market cap soared further helping it regain its position as the third-largest cryptocurrency.

Even though the alt season pushed the price of several prominent as well as lesser-known altcoins to significant heights, the price of XRP failed to cross 20 cents. While several members of the community called out the coin for its flimsy price movement, XRP went on to prove them wrong.

Just yesterday, the entire crypto market turned green. Prominent coins like Litecoin [LTC], Bitcoin Cash [BCH], as well as Bitcoin SV [BSV], garnered massive gains. The crypto industry is known for being extremely volatile, despite slight changes, several major coins witnessed a drop despite yesterday’s rally. However, XRP was the only prominent altcoin that witnessed a 6 percent increase in its price over the last 24-hours. During press time, the altcoin was trading at $0.239. Earlier today, XRP was trading at a low of $0.225 and shot up to a high of $0.242.

The coin has garnered a whopping 35.1 percent increase in its price over the last 30 days. Today’s high of $0.242 is considered to be the highest that the altcoin has recorded since the past three months.

The community was evidently blown by the altcoin’s notable price change. A Twitter user that goes by the username, CryptoBull2020 tweeted about XRP’s price movement. The tweet read,

These are the times the #XRP community has been waiting for. All will come to fruition in the next few months. Hold your precious $XRP coins as the sky will be the limit 🚀

The XRP community is even suggesting that the coin could up to $1 as it broke past two major resistance levels at $0.213 as well as $0.227.

XRP Is Now The Third-Larget Cryptocurrency

It wasn’t long ago when the largest stablecoin Tether [USDT] climbed up the ladder and dethroned XRP as the third-largest cryptocurrency in terms of market cap. Recently, Tether was lauded by the entire crypto community after the market cap of the coin hit a high of $10 billion. Several went on to lay out speculations of the coin’s market cap soon hitting $100 billion. However, it seems as though XRP regained its place in the top three as its market cap soared to $10,747,392.

Coingape is committed to following the highest standards of journalism, and therefore, it abides by a strict editorial policy. While CoinGape takes all the measures to ensure that the facts presented in its news articles are accurate.
Disclaimer The views, opinions, positions or strategies expressed by the authors and those providing comments are theirs alone, and do not necessarily reflect the views, opinions, positions or strategies of CoinGape. Do your market research before investing in cryptocurrencies. The author or publication does not hold any responsibility for your personal financial loss.
Share on Facebook
Share on Twitter
Share on Linkedin
Share on Telegram
Author: Sahana Kiran
Sahana Kiran is a graduate in Political Science, Economics and Journalism. She is a full-time crypto writer at CoinGape and takes a keen interest in cryptocurrencies, especially Ethereum and Bitcoin. Even though she's not a HODLER yet, she has eyes on Bitcoin.