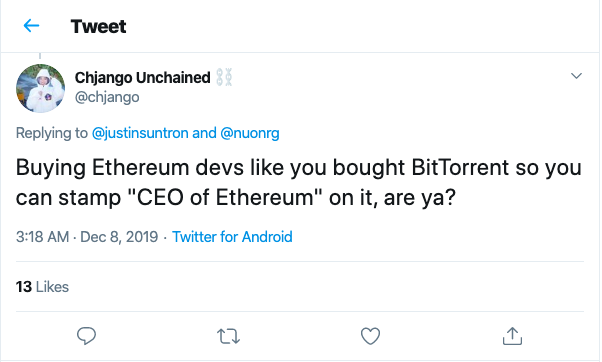 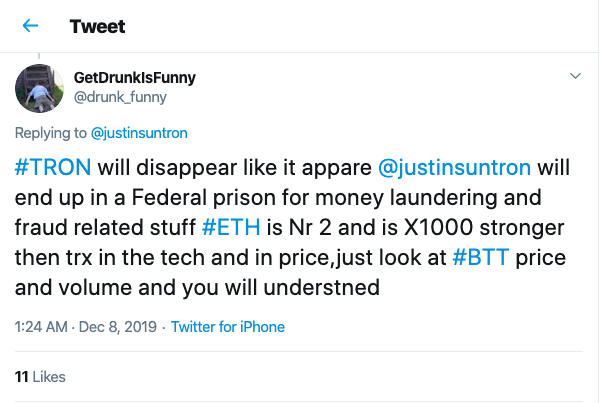 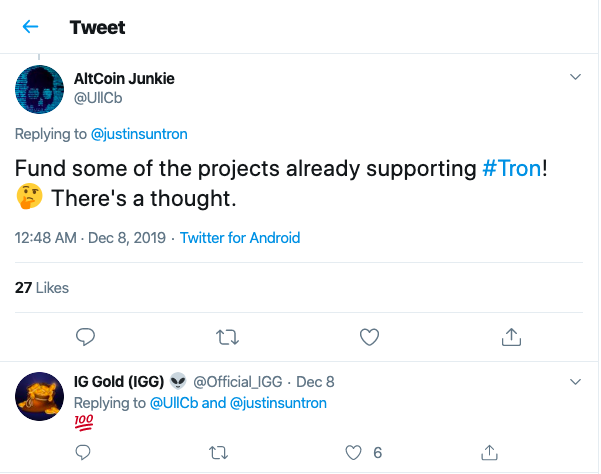 From cancelling the Buffett lunch, to getting slammed by Digibyte CEO Jared Tate, Justin Sun seems to have a knack for becoming the object of crypto Twitter’s attention. This time, he offered to help cash-strapped Ethereum developers, but he got trolled by the crypto community even while he was trying to do a good deed.

Nina Breznik, an Ethereum developer, recently tweeted that the Ethereum Foundation was planning on stopping the funding of its internal teams next year. As per the thread, Breznik has been working with Ethereum for 3 years. She worked on Remix project for 2 years, and joined PlayProject last year.

As some might already know, Ethereum Foundation is planning to stop funding for most of the internal teams in the next year.

I joined about 3 years ago and was working for 2 years on Remix and then in the last year on PlayProject.

She also shared the details of the other Ethereum projects she had worked on in more tweets, and that the Ethereum Foundation was stopping the funding of the youngest projects first. As per the thread, Breznik’s project’s funding  was stopped on the 1st of December, and other projects can also expect to see a cut in their funding in the next year.

Sadly they decided to stop funding the youngest projects first. So from December 1 our funding has stopped and other projects' funding will also have their funding cut in the following year.

She concluded her tweets requesting for partners, grants and co-branding opportunities.

So, we'd like to continue our work on projects we started and are passionate about.

We're looking for partners, grants, donations, co-branding opportunities. So please, get in touch and let's build good things together.

While the veracity of the claim that the Ethereum Foundation is cutting funding for projects is not yet confirmed, other blockchain projects jumped at the opportunity to sign on the Ethereum team.

We would love to fund #Ethereum developers to migrate their works to #TRON. Super easy! Always #BUIDL! https://t.co/hD3g7AzQrL

He tried to turn Ethereum’s loss into Tron’s gain and it did not sit well with Ethereum supporters. From pointing out that the value of Tron had been continually falling to reminding him of the Buffett lunch to advising him to fund projects which were already using Tron, the crypto community left no stone unturned in trolling Sun.

Twitter user Chjango Unchained mocked Sun that he only wanted to employ Ethereum developers so that he could become the CEO of Ethereum.

GetDrunkisFunny predicted a grim future for Tron and Justin Sun – Tron disappearing and Sun going to prison for money laundering and fraud.

The angst of the community against Tron and Justin Sun could be stemming from the fact that TRX and other coins from Justin Sun’s projects – BTT and WIN have shown a dismal performance in the last year.

Despite the Tron network having over 4 million accounts, and having nearly double the number of active users than EOS and ETH at 200K, the coin’s upward price movement has been sluggish. The coin had hit a YTD high on in June when its price had reached $0.0386, but now, it is trading at $0.0144, over 60% below the YTD high.

Article Name
Tron CEO Justin Sun Gets Trolled For Trying to Help Cash-Strapped Ethereum Developers
Description
From cancelling the Buffett lunch, to getting slammed by Digibyte CEO Jared Tate, Justin Sun seems to have a knack for becoming the object of crypto Twitter's attention. This time, he offered to help cash-strapped Ethereum developers, but he got trolled by Ethereum supporters even while he was trying to do a good deed.
Vinnie Singh
Publisher Name
Publisher Logo
Coingape is committed to following the highest standards of journalism, and therefore, it abides by a strict editorial policy. While CoinGape takes all the measures to ensure that the facts presented in its news articles are accurate.
Disclaimer The views, opinions, positions or strategies expressed by the authors and those providing comments are theirs alone, and do not necessarily reflect the views, opinions, positions or strategies of CoinGape. Do your market research before investing in cryptocurrencies. The author or publication does not hold any responsibility for your personal financial loss.
Share on Facebook
Share on Twitter
Share on Linkedin
Share on Telegram
Author: Vinnie Singh