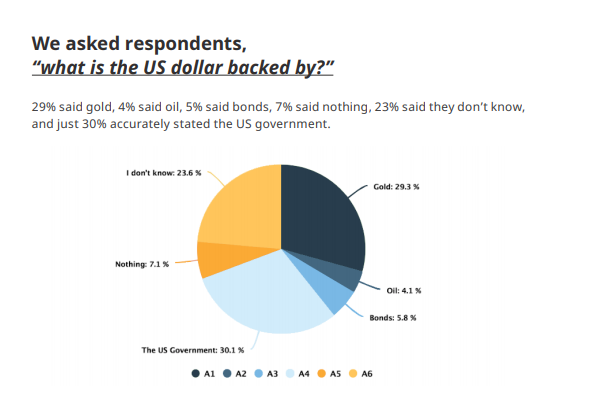 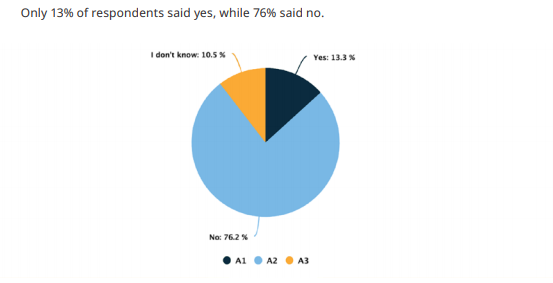 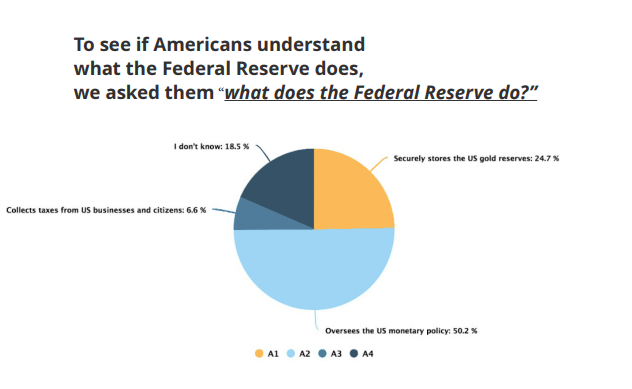 A recent study by the world’s leading hash provider, Genesis Mining has revealed some interesting findings on how the average American perceives money and banking. The study is titled, “Perceptions of Money and Banking in the United States 2019.”

The study was carried out with an objective to determine how well the average American consumer gauged the concepts behind banking, fiat money, and the Federal Reserve. The study was conducted on the 19th of September with 1,000 respondents answering a series of 23 questions.

Out of 1000 respondents questioned, approximately 29% of the respondents still believe that the US dollar is backed by gold, 4% believed it was backed by oil, 5% said bonds, 7% said nothing, 23% said they don’t know, and just 30% accurately stated the US government.

As a matter of fact,  On March 14, 1909, the US moved to a gold standard, making both gold and silver the legal-tender coinage of the United States. Per this standard, the US dollar was convertible to 25.8 grains (1.672 grams, 0.05375 troy ounces) of gold, a little over $18.60 per ounce. However, in order to combat severe deflation in 1933, President Roosevelt then implemented an act that suspended the gold standard.

Not only this, when questioned on “who decides that more dollars be printed?”, 18% of the respondents had no answer, 58% believed it was the Federal Reserve and the third-highest response was that the US government is responsible for the same. Despite the fact that traditional finance has time and again failed to meet up to the expectations of the masses, the faith in the same continues, possibly due to the lack of financial literacy.

Interestingly, 76% of respondents opposed the idea of the US government replacing paper money with digital-only money.

This, in turn,  indicates that Americans are still not ready for complete transparency when it comes to money matters. Interestingly, the perspective is not limited to that of an average American, even the bank executives also seem to be echoing the same sentiments.

Recently, the Chief Economist of popular Dutch bank ING, Mark Cliffe said that within a span of 5 years, digital currencies will be a full-fledged reality within 5 years. With nations coming forward to build their own central digital currencies, consumers will loose on anonymity as with Central Banks’ controlled digital currencies, transactions will become completely traceable for authorities.

With that being said, our lives revolve around money and it is astounding that people out there still need to gain major clarity about the money flow and the internal workings of it. It is also possible that when such clarity is obtained, the ideas of mainstream adoption of cryptocurrencies do not seem alien and gains wider acceptance.

However, all that glitters is not gold. The negative sentiments around cryptocurrencies continue to prevail due to its usage in illegal activities and terrorism and several cases of money laundering.  The month of August revealed North Korea using “widespread and increasingly sophisticated” cryptocurrency hacks to collect roughly $2 billion. The funds were used for purchasing weapons of mass destruction.

Will digital currencies eventually gain acceptance from people? Let us know, what you think in the comments below!

Article Name
29% Americans Still Believe US Dollar is Backed by Gold, Study Finds Out
Description
A recent study by the world’s leading hash provider, Genesis Mining has revealed some interesting findings on how the average American perceives money and banking. The study is titled, "Perceptions of Money and Banking in the United States 2019."
Publisher Name
Publisher Logo
Coingape is committed to following the highest standards of journalism, and therefore, it abides by a strict editorial policy. While CoinGape takes all the measures to ensure that the facts presented in its news articles are accurate.
Disclaimer The views, opinions, positions or strategies expressed by the authors and those providing comments are theirs alone, and do not necessarily reflect the views, opinions, positions or strategies of CoinGape. Do your market research before investing in cryptocurrencies. The author or publication does not hold any responsibility for your personal financial loss.
Share on Facebook
Share on Twitter
Share on Linkedin
Share on Telegram
Author: Supriya Saxena