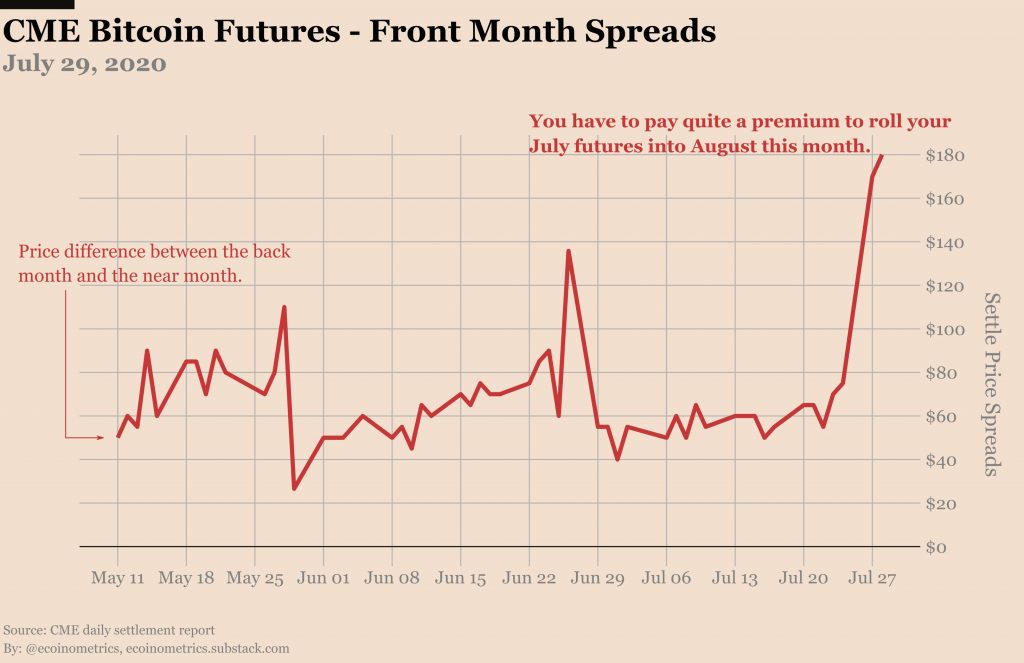 Bitcoin’s breakout over $10,000 and then $11,000 hours later caught everybody by surprise, none more so than the ‘smart money’ investors. While the cryptocurrency’s market is gradually shifting towards the institutional class, with Bitcoin seen as an ‘investment’ rather than a ‘currency’ the shift is not as seamless as expected.

Since May, the cryptocurrency was trading in a tight range, no halving pump hinted at, a high correlation with the stock markets, and yearly-lows on volatility, in short, it wasn’t a crypto market at all. But then it all changed July 26 when the first strong move over $10,000 manifested, and in the week since, the price has long pushed higher.

As stated earlier, the “smart money” as a recent report from Ecoinmetrics described them, are “net short,” while retail investors were long, and since the move, have moved even more so in that bullish direction. For the former folk, the ‘net short’ position is not looking like a “comfortable position to be in today” noted the report.

But before delving into sentiment, let’s look at how the derivatives market reacted to the pump. As trading opened on Monday, July 27, more than 24 hours after the $10,000 surge, the Chicago Mercantile Exchange [CME] traded Bitcoin Futures through the roof. At the end of the trading day, 25,493 contracts were traded, each representing 5 Bitcoin i.e. over 127,000 BTC. This marked the exchange’s highest volume since February 2020.

It should be noted that the volume has since petered out to 11,973 on 30 July, the increase in trading activity is a healthy sign, especially considering the persisting dry run for the previous two months.

Not only has this price pump pushed volumes, but open interest and premiums as well. The CME Bitcoin Futures open interest level has shot up over 60,000 Bitcoins, with the report stating that the month of July has over 4,700 open contracts [not open Bitcoin i.e. each contract represents 5 Bitcoin] yet to expire, as estimated on Tuesday, July 28.

Premiums for the contracts expiring next month have shot up to $180. In the past two months, the highest premium was $140 during the June 26 expiry of over 120,000 Bitcoin Futures and Options contracts on several exchanges.

On the options front, there is a high ceiling on the settlement of Bitcoin’s price with the lowest leg of the contracts settling at a strike price of $11,000. Hence, for a settlement profit to be seen, the cryptocurrency would have to settle, given the expiry period, over $11,000, and given the trading price of BTC is $11,050, the profit at this moment is meager.

Regardless of institutional profit, one thing is certain, this trading activity is signaling, as the report put it, a “reviving appetite for more bullish positions.” Further this ‘reviving appetite’ is despite institutional investors being net short on Bitcoin’s price, now that they are flipping the script, how would that turn out for the market?