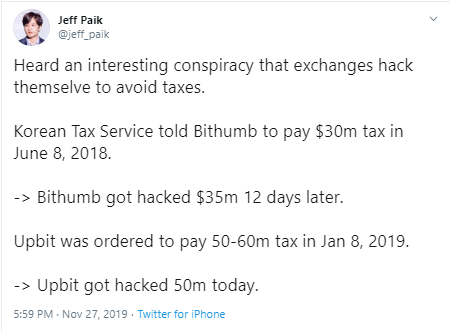 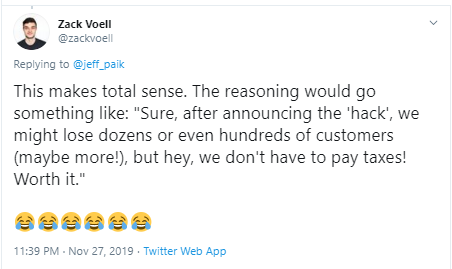 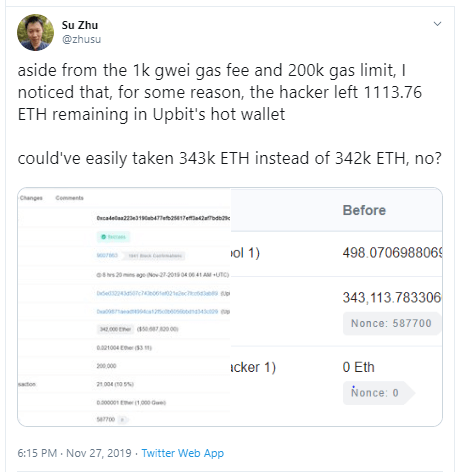 With news of Upbit exchange hack doing rounds, there is yet another twist to the whole Saga. Jeff Paik, CEO at Finector has thrown light on the fact that how this case can be one of the instances of crypto exchanges hacking themselves to avoid taxes.

The Case of Bithumb Hack

Jeff Paik reiterated the example of Bithumb in 2018 when the Korean Tax Service asked Bithumb to pay $30 MM in taxes. Interestingly, Bithumb got hacked of $35 MM a few days later. As a matter of fact, Upbit was ordered to pay 50-60m taxes in Jan 8, 2019, and yesterday, Upbit got hacked of $50 MM.

A twitter user, Zack Voell said that this conspiracy made complete sense as the exchanges would rather lose their customers but not pay taxes.

The tweet also saw Co-founder of Pocket Nodes commenting that what a fabulous conspiracy it was.

Another, interesting fact was revealed by Su Zhu, CEO, Three Arrows. He revealed how aside from the 1k GWEI gas fee and 200k gas limit, the hacker left 1113.76 ETH remaining in Upbit’s hot wallet. When the hacker could have easily taken the full 343K ETH.

On which, twitter user, Crypto Loomdart responded that probably the hacker had some Ethereum(ETH) balance on Upbit. Also, it is likely that the hacker buys some dips on Ether when the news of theft is out in public.

Anthony Yoon, head of partnerships at The Spartan Group mentioned that markets have not been performing that well in South Korea and new listings on exchanges continue to perform poorly. He further hinted that Upbit has paused any listings.

As reported by Coingape,  the Upbit hacker has started moving the stolen ETH to other addresses. The movement saw 112,020 ETH worth over $17 million in all being transferred to two addresses. The two newly created addresses start with 0x9A207194cb and 0x3408EdCa2d respectively.

Will Upbit manage to restore users’ funds and build the lost trust again? Let us know, what you think in the comment below!

Article Name
Was Upbit Hack An Attempt To Evade Taxes? Here is Why
Description
With speculations of Upbit exchange hack doing rounds, there is yet another twist to the whole Saga. Jeff Paik, CEO at Finector has thrown light on the fact that how this case can be one of the instances of crypto exchanges hacking themselves to avoid taxes.
Supriya Saxena
Publisher Name
Publisher Logo
Coingape is committed to following the highest standards of journalism, and therefore, it abides by a strict editorial policy. While CoinGape takes all the measures to ensure that the facts presented in its news articles are accurate.
Disclaimer The views, opinions, positions or strategies expressed by the authors and those providing comments are theirs alone, and do not necessarily reflect the views, opinions, positions or strategies of CoinGape. Do your market research before investing in cryptocurrencies. The author or publication does not hold any responsibility for your personal financial loss.
Share on Facebook
Share on Twitter
Share on Linkedin
Share on Telegram
Author: Supriya Saxena