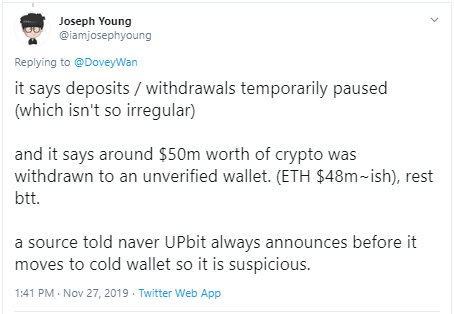 As per recent reports, the South Korean cryptocurrency exchange Upbit has stopped trading after the withdrawal of 60 Billion Won. Furthermore,  the exchange released a notice at 04:30 UTC today suspending crypto deposits and withdrawals due to server check.

Crypto community suspects that the exchange has been hacked and the Korea Internet & Security Agency (KISA) is investigating whether it has been hacked.

Crypto analyst Joseph Young says that while the temporary suspension of deposits/ withdrawals is not irregular, no prior announcement by the exchange makes it suspicious. His tweet further mentions that around $50m worth of crypto has been withdrawn.

He further pointed out that

“If you were hacked, you should stop everything, but Korean Won deposits and withdrawals are still in progress at this time.” He further commented that it is still early to point out if the exchange has been hacked or not.

No other announcements except temporary suspensions have been made. Whale Alert has further reported 17 other transactions with BitTorrent(BTT), TRON(TRX), Stellar(XLM), OmiseGo(OMG), EOS(EOS), Pundi X(NPXS) and Status(SNT). Reportedly, all the money has been sent from Upbit.

Upbit exchange has responded and said that among the multiple whale transfers, transfer involving ETH is abnormal. Furthermore, other transactions were done only for wallet management.

Also, to protect the user’s asset security, the exchange will cover for losses incurred and support the relevant proceedings being carried out. The exchange also announced that cryptocurrencies stored in the hot wallet have been moved to cold wallets. Also, it will take almost two weeks to resume deposits and withdrawal services.

In September this year, Upbit canceled its partnership with Bittrex. While such large amounts of transactions often cause confusion in the market, they often give insights on the movements of crypto assets between exchanges.

Will users continue to maintain the same trust in Upbit?  Let us know, what you think in the comments below!

Article Name
Upbit Puts Ends To Exchange Hack Speculations
Description
As per recent reports, the South Korean cryptocurrency exchange Upbit has stopped trading after the withdrawal of 60 Billion Won. Furthermore,  the exchange released a notice at 04:30 UTC today suspending crypto deposits and withdrawals due to server check.
Supriya Saxena
Publisher Name
Publisher Logo
Coingape is committed to following the highest standards of journalism, and therefore, it abides by a strict editorial policy. While CoinGape takes all the measures to ensure that the facts presented in its news articles are accurate.
Disclaimer The views, opinions, positions or strategies expressed by the authors and those providing comments are theirs alone, and do not necessarily reflect the views, opinions, positions or strategies of CoinGape. Do your market research before investing in cryptocurrencies. The author or publication does not hold any responsibility for your personal financial loss.
Share on Facebook
Share on Twitter
Share on Linkedin
Share on Telegram
Author: Supriya Saxena