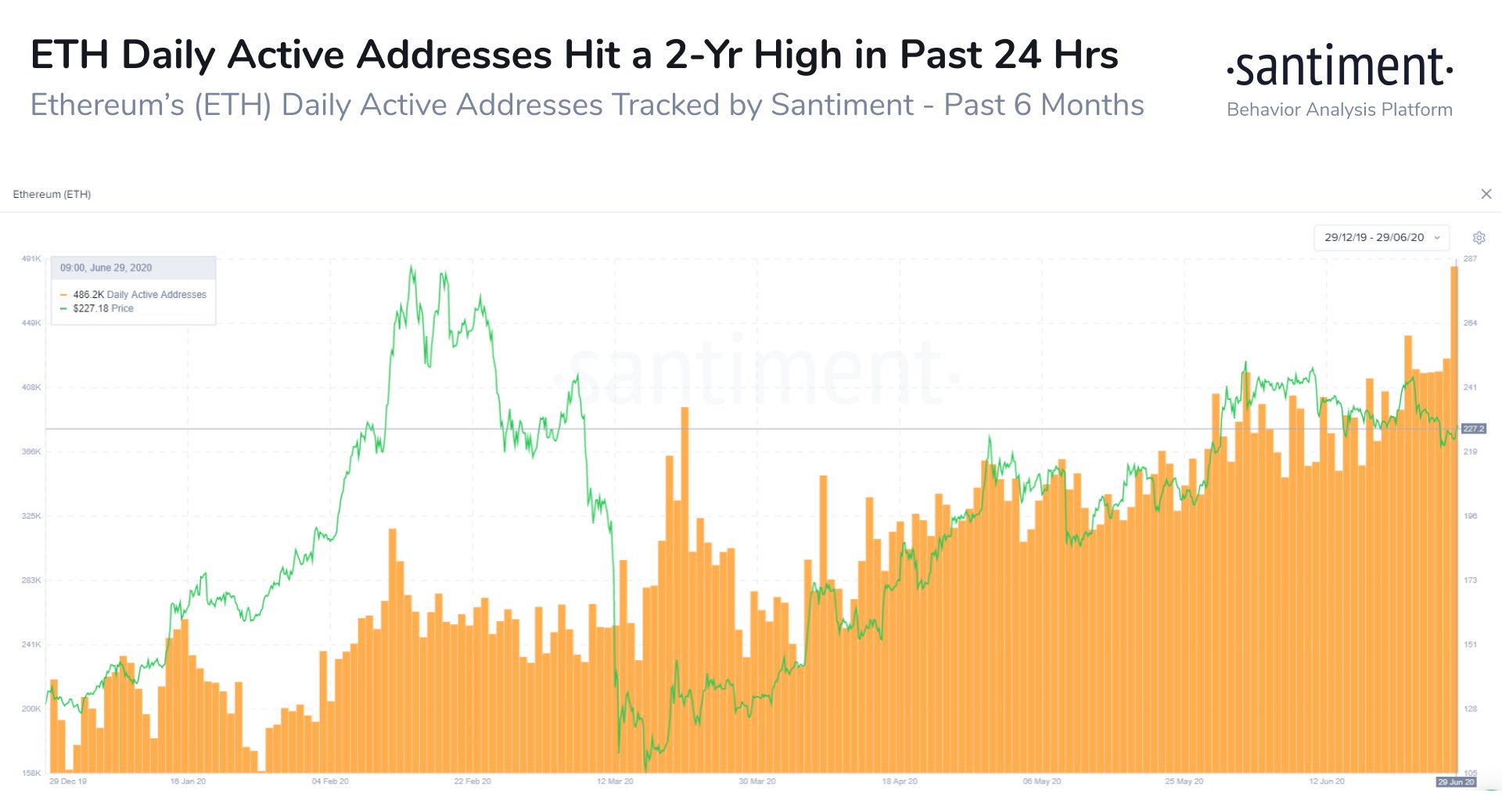 Over the past few weeks, Ethereum has undergone several major downside corrections. Along with its peer altcoins, Ethereum too noted a rather flat month, with respect to price action. However, that hasn’t been the case when several other on-chain metrics are taken into consideration. In a recent development for the world’s largest altcoin, Ethereum noted a spike in its daily active addresses, a spike that saw the metric touch a level unseen since the 5th of May, 2018. This was observed by crypto-analytics platform, Santiment, which tweeted,

“The number of daily addresses interacting with $ETH has spiked in the past 24 hours to a 2-YEAR SINGLE DAY HIGH of 486,000 addresses! The last time Ethereum’s address activity was this high was on May 5th, 2018.”

The hike in Ethereum’s daily active addresses had previously coincided with a strong price rally on the charts. The last time the figures hit this level, the cryptocurrency had reached a local top of $825. Therefore, the present scenario could also be a sign of a growing accumulation trend in the market, one that has not been seen for a long time as exchange balances continued to rise. Further, this could also be hinting at a trend reversal and an inkling of a local top forming in the short-term, as the coin was trading around low price levels.

In fact, accumulation trends have been forming for the past couple of days now. This was evidenced by alerts from Glassnode revealing an increase in the number of addresses holding 0.1+ coins. This figure was found to have stagnated briefly, but appeared to have picked up the pace, at the time of writing. Additionally, the number of addresses holding 100+ coins also noted a significant surge, climbing to a new ATH of 52,755.

Interestingly, it is not just the small and big investors, but miners also who have been accumulating ETH. Ethereum miners have collectively increased their balance ahead of the upcoming network upgrade – ‘Ethereum 2.0.’ This means that market participants in the Ethereum blockchain could be anticipating a potential near-term price surge, an expectation that could have propelled this behaviour.

Ethereum recently reached a 2-month high in terms of Token Age Consumed. While this could also be a sign of a potential downside correction, the movement of dormant tokens, on the other hand, could reverse this into something positive, further solidifying the argument backing a positive price trend.