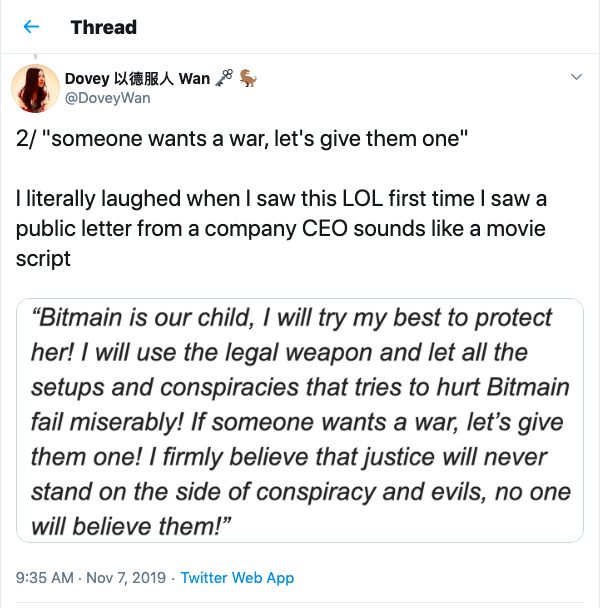 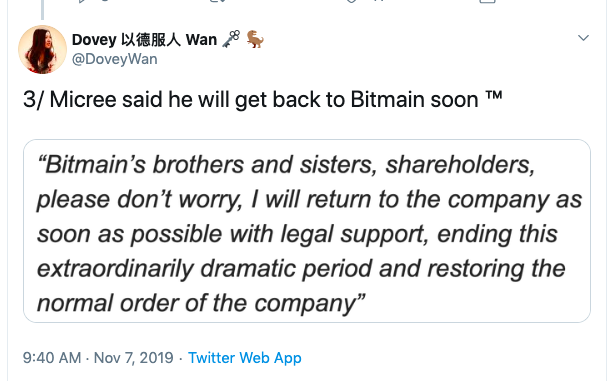 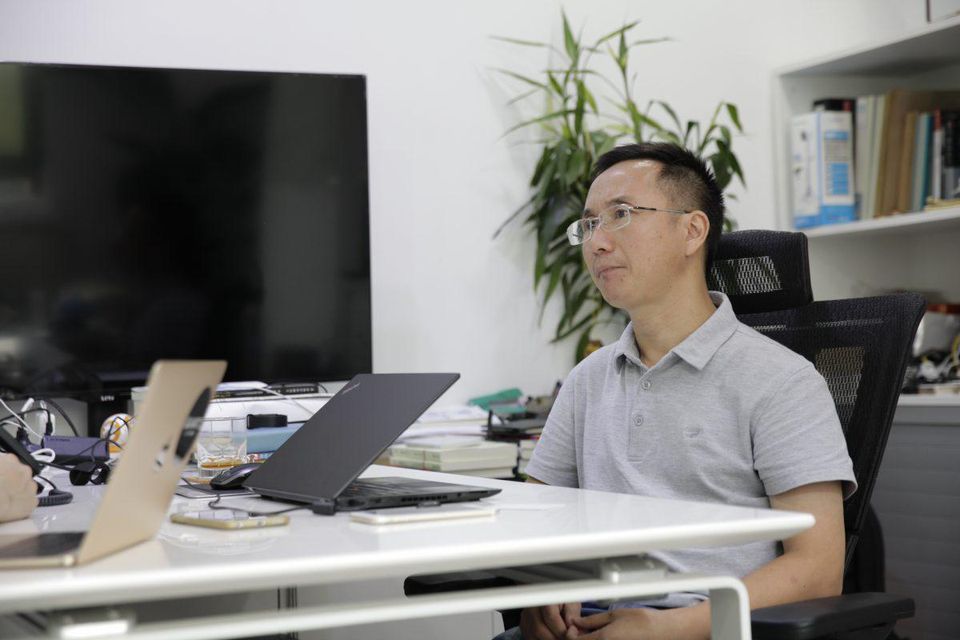 The Bitmain civil war continues. Ousted co-founder of the the company, Micree Zhan has responded to the event with an open letter to the employees, sharing that he will return to the company soon and restore “normal order in the company”.

Zhan’s firing had made headlines in the crypto-sphere because it had been far more dramatic than regular firings. His email was deleted and he was barred from entering the company’s office by security. The staff in the HR department was replaced by Wu’s own people. Even the employees had been instructed to not take any orders from him or attend any of his meetings. According to Dovey Wan, Zhan’s firing looked more like a political coup.

Dovey Wan took to Twitter today to share Zhan’s response to the event. Zhan has written an open letter to the employees at Bitmain, and a translated version of extracts from the letter has been shared by Wan on Twitter. As per the letter, Micree Zhan is very embarrassed about what happened. Apparently, he is feeling betrayed about what was done to him while he was away on a business trip. He has even compared the event to a movie plot where a brother who had once been a “trusted partner” and fought alongside the protagonist turns into a foe and stabs the protagonist in the back.

Advertisement
Source: Twitter Zhan is Ready to Give Wu a War

Zhan further said that Bitmain is his child and he will do his best to protect her. He will use “legal weapons” to disable schemes and conspiracies that hurt Bitmain. If Wu wants a war, then Zhan is ready to give it them. Wan was quite amused by this part and she compared it to a movie script.

Source: Twitter Zhan Will Return to the Company Soon

Zhan has also shared that he will return to the company with legal support as soon as possible. He will put an end to this “extraordinarily dramatic period and restore the normal order of the company”.

With his comeback, Zhan has grand plans for the growth of Bitmain. In the letter, he wrote that Bitmain will achieve the goal of 90% market share of BTC miners. He also said that their AI business will hit the 100 million yuan in revenue milestone in 2019, and he is expecting 1 billion yuan in revenue in 2020.

If Zhan will be able to make a comeback and achieve his plans remains to be seen. At the moment, it would be interesting to see how Jihan Wu and Bitmain’s employees respond to Zhan’s letter.

Article Name
Bitmain Civil War: Expelled Co-Founder Sends Open Letter to Bitmain Employees; Planning a Comeback Soon
Description
The Bitmain civil war continues. Ousted co-founder of the the company, Micree Zhan has responded to the event with an open letter to the employees, sharing that he will return to the company soon and restore "normal order in the company".
Vinnie Singh
Publisher Name
Publisher Logo
Coingape is committed to following the highest standards of journalism, and therefore, it abides by a strict editorial policy. While CoinGape takes all the measures to ensure that the facts presented in its news articles are accurate.
Disclaimer The views, opinions, positions or strategies expressed by the authors and those providing comments are theirs alone, and do not necessarily reflect the views, opinions, positions or strategies of CoinGape. Do your market research before investing in cryptocurrencies. The author or publication does not hold any responsibility for your personal financial loss.
Share on Facebook
Share on Twitter
Share on Linkedin
Share on Telegram
Author: Vinnie Singh