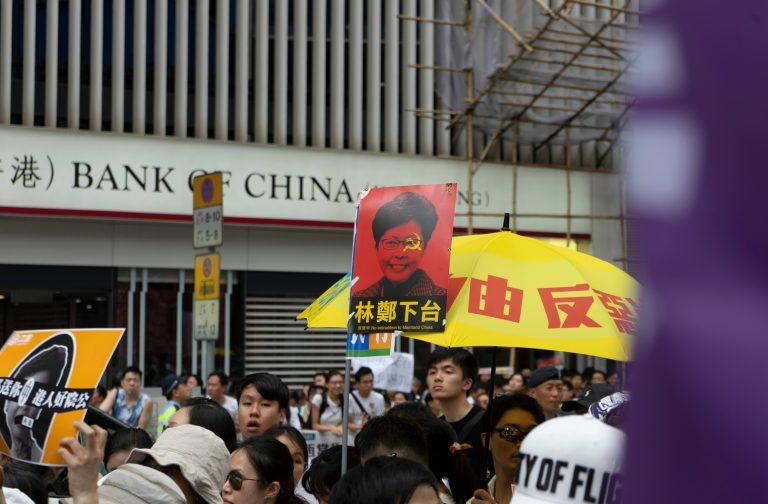 The ERO imposed as of October 4 is not viewed as martial law by the Hong Kong government, but chief executive Carrie Lam’s declaration that the city is “not in a state of emergency” seems outlandish given the circumstances. The Hong Kong Free Press asserts:

The ERO is a colonial-era law that gives the chief executive unlimited power in the event of an “emergency or public danger.” The ERO, introduced in 1922, has not been used since the 1967 leftist riots.

Ben Song, an activist from Dallas, Texas, attending protests in the city, told news.Bitcoin.com via text message that “The ERO invoked recently to create the Anti-Mask Ban was a major turning point. The system has been eliminated and people are responding en masse.”

Though the extradition bill that had originally sparked protests was announced as withdrawn on September 4, important core demands of protestors were still not met. For example, greater independent investigation of police was one of the five core demands, which Lam struck down, affirming that the current Independent Police Complaints Council (IPCC) was sufficient. Activist Joshua Wong summarized protestor’s frustrations with the incomplete address of grievances in a tweet claiming that “Carrie Lam’s repeated failure in understanding the situation has made this announcement completely out of touch.”

Bank runs all over Hong Kong now. ATM machines running out of cash but there is something more important…failed leader carrie lam(b) can now officially confiscate bank accounts and assets without recourse. The HK legal system is essentially gone. #Bankruns #HKexit https://t.co/jz9sPrA30U

Song affirmed to news.Bitcoin.com that “The economic state of the city is grim,” adding that “With everything shut down any economic activity is running at a snails pace.” Kyle Bass, Chief Investment Officer at Hayman Capital, echoes the assessment, tweeting on October 5 that under the ERO Carrie Lam basically has carte blanche to confiscate and freeze financial assets at will. Bass proclaimed: “The HK legal system is essentially gone.” Hong Kong dollar investments are said to be rapidly liquidating against the chaotic backdrop as well, with Song conveying to news.Bitcoin.com:

People are selling HKD investments like crazy. The HKD is fast approaching the 7.85 peg, after which the Hong Kong Monetary Authority will need to take action.

Economists in the city mention that likely recourse to combat this flight from the HKD will be elevated interest rates and a selling off of USD reserves, according to the Dallas activist. Song notes that “China is already facing a 2008 style debt crisis because it has incurred massive debts at all levels public and private to fund property developments that are worthless.”

As news.Bitcoin.com recently reported, although bitcoin has been purchased for notable premiums via HKD throughout the protests, crypto still doesn’t seem to be the refuge of choice for most Hong Kongers struggling under Lam’s antiquated regime. Song says that from his perspective “People do not really use bitcoin day to day, although there are bitcoin ATMs here. People still use cash and the money supply has not been noticeably constricted by bank runs.” The activist detailed further: “Bank runs and ATMs running out of money is mostly localized.” As for the top refuge currencies, Song stated that “Hong Kong is much more likely to flee into USD, AUD, and JPY.”

Localized or otherwise, the widespread occurrences signal the economic fear pervading the city which is now becoming almost palpable, even for spectators from afar. Images shared to Twitter by user @hsky8964 don’t paint a very reassuring picture. Also, smaller banks and local bank branches are often the first hit in of economic crises like this, so the localized clusters of intense panic make sense. Whatever the case, Song doesn’t see the problems ending anytime soon, noting:

The Hong Kong protests are here to stay and the repercussions will be global, with heavy effects on China’s economy and beyond.

What are your thoughts on the economic situation in Hong Kong? Let us know in the comments section below.